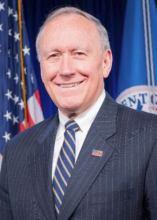 Appointed on April 2, 2018, Assistant Secretary Hill is responsible for the Office of Partnership and Engagement (OPE). OPE serves as the Office of the Secretary’s outreach to state, local, tribal and territorial governments, state and local law enforcement, private sector and academic engagement.

Governor Mike Pence appointed Hill as his deputy chief of staff for public safety on July 10, 2014, where he oversaw all of the state’s public safety agencies. He also chaired the Indiana Criminal Justice Institute Board of Trustees, Governor’s Task Force on Drug Enforcement, Treatment and Prevention, and the Indiana’s Executive Council on Cybersecurity.

Previously, he was the Executive Director of the Indiana Department of Homeland Security, a position he served in beginning January 14, 2013. There he was responsible for the state’s emergency management and homeland security efforts, including planning, training, emergency response and recovery, fire and building safety, and grants administration. He also served as the director of the Counter Terrorism and Security Council, which is chaired by Indiana's Lieutenant Governor.

He formed The Hill Group, Inc. in 2009 and worked as a consultant on highway safety matters until 2013.

In 2003, President Bush appointed Hill to serve as the Chief Safety Officer at the Federal Motor Carrier Safety Administration (FMCSA), and was unanimously confirmed by the United States Senate to be FMCSA’s Administrator in 2006. In this role, he was responsible for improving the nation’s commercial vehicle highway safety by finalizing several key safety regulations, improved performance of commercial motor carriers in cooperation with the state enforcement agencies and provided careful coordination with the United States Congress on a variety of critical initiatives.

Also at the federal level, Mr. Hill was involved in national preparedness and response to terrorism, pandemic influenza and natural disasters. He served as the U.S. Department of Transportation Secretary’s personal representative for transportation matters in Mississippi and Louisiana following Hurricane Katrina.

Mr. Hill has more than 40 years in public service at the federal and state levels. He was a member of the Indiana State Police for 29 years, working in both public safety and highway safety. He also served as the Field Enforcement Division Commander and was later asked to create the State Police’s new Motor Carrier Division.

Mr. Hill is a graduate of Taylor University where he obtained a B.A. in political science. He also graduated from the Indiana State Police Academy. He and his wife, Pepper, reside in Greenwood and are the parents of two grown sons. Lt. Colonel Nathan Hill is an aviator with the United States Marine Corps in San Diego, CA and Micah is a business owner in Indianapolis.

Home > About DHS > Leadership > John H. Hill
Back to Top