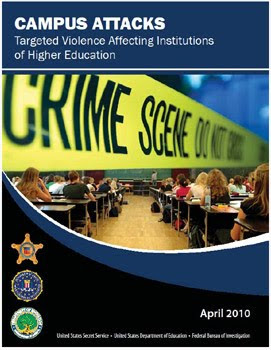 On the third anniversary of the tragic shooting at Virginia Tech, the U.S. Secret Service, the U.S. Department of Education and the Federal Bureau of Investigation released a study of targeted violence incidents on U.S. campuses of higher learning.

The June 2007 Report to the President on Issues Raised by the Virginia Tech Tragedy included a recommendation that the Secret Service, Department of Education and the Federal Bureau of Investigation explore the issue of violence at institutions of higher education. This collaborative effort examines the scope of the problem of targeted violence at U.S. colleges.

In total, 272 incidents were identified through a comprehensive search of more than 115,000 results in open-source reporting from 1900 to 2008. The incidents studied include various forms of targeted violence, ranging from domestic violence to mass murder. The findings should be useful for campus safety professionals charged with identifying, assessing and managing violent risk at institutions of higher education.

The study and its findings are available on each of the agencies’ Web sites: http://www.secretservice.gov/, http://www.ed.gov/ and http://www.fbi.gov/.
Published by the U.S. Department of Homeland Security, Washington, D.C.