Air Flow Testing in “the T” 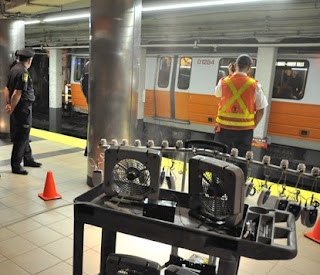 We are up in Boston this week conducting a rather interesting experiment in the subway system. A team of scientific researchers, led by the Department of Homeland Security’s (DHS) Science & Technology Directorate, are releasing plumes of gas and particle tracers in the tunnels of the Massachusetts Bay Transportation Authority (MBTA), known in Boston as “the T”, subway system that covers a good part of the Boston metropolitan area. The gases and particulates are harmless, of course, but can be easily detected by our sensitive equipment. More importantly, they can replicate how more harmful airborne substances could spread through the tunnels and, ultimately, the city above.

It’s a bit different from the way people usually think of the S&T Directorate. Most of the time folks think of us as trying out some new gadget designed to help DHS’s operational components and the nation’s first responders to be safer, faster, or more efficient. Well, we do that kind of stuff too, but it’s these knowledge products that can make a real difference.

What we learn from this experiment will, we hope, help our partners in law enforcement to establish response plans and make operational decisions in the face of an intentional or accidental release of nasty chemicals or biological agents. This could even help in local response to less-catastrophic events, such as dealing with smoke, fuel spills or other everyday chemicals. 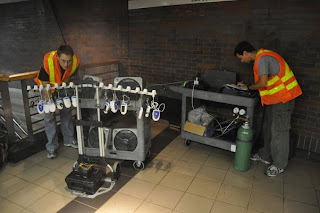 The data we collect will help us determine where to place sensors and detection devices that can serve as rapid warning in the event of an incident. With a better understanding of the airflow dynamics that take place in underground tunnel systems, we can also apply what we learn to the development of new detection devices. The S&T Directorate has several programs working on devices for chemical, biological, radiological, and explosives detection.

This is actually the second series of such tests in “the T”. Last December, we and our partners from MBTA Transit Police, Argonne National Laboratory (ANL), Lawrence Berkeley National Laboratory (LBNL), the Defence Science and Technology Laboratory of the United Kingdom, the Chemistry Centre of Western Australia and our technology vendor conducted the same type of experiment amidst cold, snowy winter weather. This week’s comparative test during the hot, humid summer will show us how temperature, humidity and other weather factors influence the movement of airborne material.

This project, funded by S&T’s Chemical & Biological Division, is all part of the Department’s ongoing commitment to preparedness and helping to protect the nation’s critical infrastructure. Boston’s subway system is one of the oldest in the country. It was built in stages over generations, so has a variety of train cars and rail configurations. Conversely, Washington DC’s Metro system is one of the newer subways in the nation. We have conducted similar system-wide studies there in previous years. By looking at the data we collect from the two vastly different systems, we can apply what we learn to other subways systems across the nation and to our international partners—all in the effort to keep travelers safe.