DHS for a Day III

Posted by Douglas A. Smith, Assistant Secretary for the Private Sector

The DHS Private Sector Office engages individual businesses, trade associations, academia, and other non-governmental organizations that work with the Department as part of the broader homeland security enterprise. As a part of this engagement, we hosted the third DHS for a Day on June 2nd in Miami, Florida. The series continues to grow in popularity with private sector participation from academia, retail, finance, shipping, and a variety of other industries. 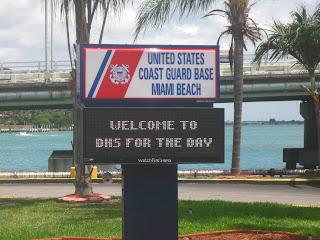 In Miami, we showcased more DHS components than ever before – including the U.S. Coast Guard (USCG), U.S. Customs and Border Protection (CBP), U.S. Immigration and Customs Enforcement (ICE), and the Transportation Security Administration (TSA).

The day began in the Coast Guard’s ‘Gator Den’ with briefings that provided an overview of DHS’ missions in the Miami area, while emphasizing the partnership between DHS components and their public and private sector partners.

After the presentations, the group boarded the 100 ft. USCG Cutter Kodiak Island for a brief tour of the harbor and cruise ship terminal. As part of the tour, USCG staged a live air-to-sea rescue demonstration, showcasing multiple rescue methods. These critical lifesaving capabilities are utilized daily in the Miami area for those who encounter trouble at sea.

After returning to USCG Base Miami Beach, ICE gave a brief presentation on their Tactical Dive Team, one of the many layers of security that DHS uses to prevent contraband from entering the country. 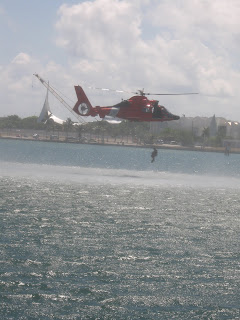 In the afternoon, the participants traveled to the sea port to see firsthand a variety of security procedures employed by CBP personnel – including radiological, canine and hands-on screening – to secure the more than 10,000 containers that travel through the port each month.

While visiting with CBP officials, the group also saw some of the innovative ways that smugglers attempt to bring illicit items into the country – including fake plantains, roofing tiles and an entire airplane engine that contained 244 pounds of cocaine, to name a few.

After experiencing CBP operations at the sea port, the group headed to the final stop of the day: Miami International Airport (MIA). There they toured a variety of facilities comprising the CBP Passenger Analysis Unit and the Customs Screening Area. These programs, targeting different aspects of a travelers entrance into the U.S., ensure that our borders continue to be secure while allowing legitimate travel to flow quickly through.

The group rounded out the day with a meeting with TSA officials at MIA to learn about explosive detection technology and TSA’s efforts to secure legitimate trade and travel while preventing terrorist attacks.

We hope participants left this third DHS for a Day with not just an inside look into DHS operations but a better understanding of our mission and the challenges we face. As we plan the next event, we will continue to strengthen partnerships with our public and private sector stakeholders as we all share responsibility to protect the homeland.

Learn more about the DHS for a Day program.