Posted by the TSA Blog Team

Editor's note: This blog was originally posted to the TSA Blog on December 31, 2013.

2013 was an important year for TSA, as we continued to move away from a one-size-fits-all approach to security, and towards a more risk-based security posture. At the heart of this effort has been our focus on expanding expedited screening opportunities to eligible members of the traveling public. Let’s take a look at some of the significant steps we have taken toward that goal and new ways we share TSA information over the last year.

TSA Pre✓™ Expansion: Most importantly, 2013 saw the TSA Pre✓™ program dramatically expand to nine participating airlines and 113 airports.  TSA Pre✓™ allows low-risk travelers to experience faster, more efficient screening and leave on their shoes, light outerwear and belt, and keep their laptop in its case and 3-1-1 compliant liquids/gels bag in their carry-on. Since its launch in October 2011, more than 30 million passengers have experienced TSA Pre✓™.

TSA Pre✓™ Application Centers Launch: In December, TSA launched its first of many TSA Pre✓™ Application Centers which expanded the expedited screening program to a larger population of travelers. This new application program allows pre-approved, low-risk travelers the opportunity to apply for expedited screening in select screening lanes at participating U.S. airports. There are currently 11 TSA Pre✓™ application centers, and TSA has planned to open more around the country in 2014. 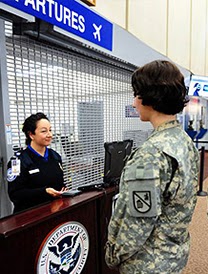 TSA Pre✓™ for Members of the Military: As a result of the ongoing partnership between TSA and the Department of Defense, TSA Pre✓™ expedited screening was extended to all U.S. Armed Forces service members. Service members, including those serving in the U.S. Coast Guard, Reserves and National Guard, may now enjoy the benefits of this expedited screening program at all 113 participating airports when flying on any of the nine participating airlines.

TSA Spanish-Language Site: The new Spanish-Language site offers information about TSA’s screening process and security procedures to Spanish speaking travelers. The Spanish language site contains the same helpful traveler information and tips that are available on tsa.gov, and is the TSA’s next step in its plans to easily connect with passengers in their native language and ensures that Spanish speaking passengers have the most current information and security updates available.

As we look back at 2013, we also remember Transportation Security Officer Gerardo Hernandez, who was killed in the horrendous attack at LAX.  Officer Hernandez’s death reminds us of the risks the brave men and women of TSA face every day as they work to protect the traveling public. We will continue to honor Officer Hernandez’s memory as we move into 2014 – working each day to keep the traveling public secure.