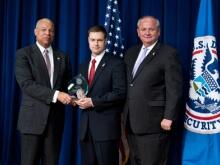 On his return from a weekend skiing trip on March 9, 2014, U.S. Immigration and Customs Enforcement (ICE) Boston Field Office Deputy Director Christopher Cronen responded to a roll-over accident that had occurred at a toll booth in New Hampshire. With the assistance of Air Force personnel who had also stopped to help, Cronen pulled back the sunroof and safely removed from the burning car the driver, who was buckled in, unconscious, and bleeding, as well as two young boys.