On December 30, Inspector Thompson was driving westbound on Route 228 in Southern Maryland when he noticed smoke in the air.  He came upon a three-car accident blocking the right lane, and immediately notified the FPS Suitland MegaCenter, one of four FPS 24/7 interoperable communication, alarm and dispatch centers. Upon arriving at the crash scene, Inspector Thompson discovered an unconscious male locked inside one of the crashed and smoking vehicles.

As Thompson was attempting to open the vehicle’s door,  flames ignited. Inspector Thompson quickly retrieved a tire iron from his own vehicle to break the glass and unlock the driver’s door. After releasing the man’s seat belt he was able to extract him from the burning vehicle.

When we asked him about these events, Thompson humbly credited his calm action and decisiveness to training received from his law enforcement instructors, saying that he  “started praying at one point when I was searching my car for the tire iron, hoping that I could find the tools I needed to get the man out alive. I remembered words my instructor used to tell me to take my time and focus. It took several tries to break the glass, and I was relieved when the car window finally gave way.”

Inspector Thompson and the man were later joined by Charles County Police, Emergency Medical Service and Maryland State Police, and the crash victim was taken to the hospital with only minor injuries. 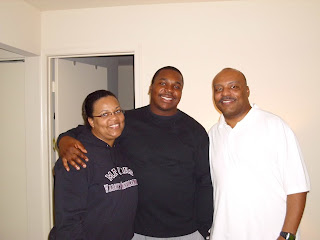 Inspector Thompson is being recognized for his bravery and initiative to go above and beyond his protection duties for the Department. His commitment to citizen and public safety exemplifies the standards of excellence held by the Federal Protective Service, and the Department.