"If You See Something, Say Something™"at Super Bowl XLV 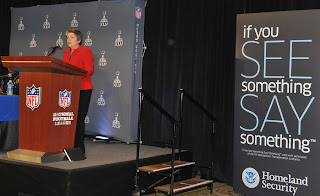 This weekend individuals, friends, and families across the country and around the world gather to embark on a treasured, yet unofficial holiday of sorts...

Super Bowl Sunday - the culmination of the NFL season, the day when serious and casual fans alike come together to enjoy the excitement of the biggest sporting event of the year.

Most Americans will watch the game close to home, enjoying lively banter about whether the Green Bay Packers or the Pittsburgh Steelers can claim a better defense, or which ad can deliver a better punchline. Others, especially in the Dallas-Ft. Worth area where this year's game will be played at Cowboys Stadium, will be caught up in a rush of crowds and activity that both adds to the frenzy and presents opportunities for helping to ensure the security of fans, players and employees by identifying and reporting suspicious activity.

That's why DHS has partnered with the NFL to bring our "If You See Something, Say Something™" public awareness campaign to Super Bowl XLV. Each citizen has a role to play in identifying and reporting suspicious activities and threats - and this year, the campaign will be a driving force in helping those attending the game or watching from nearby to participate in the shared responsibility of keeping the area safe and secure. 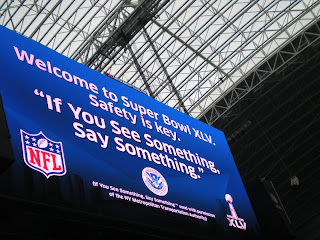 The "If You See Something, Say Something™" campaign has been running print advertisements in and around the Dallas area, reminding citizens to identify and report indicators of terrorism, crime and other threats to the proper transportation and law enforcement authorities.  "If You See Something, Say Something™" will be prominently displayed on press credentials, souvenir prints, stadium TV monitors, game day maps, and even on the famed octagonal ‘jumbotron’ at Cowboys Stadium - the biggest in the world - making this reminder of our shared commitment to hometown security impossible to miss.

Secretary Napolitano joined NFL Vice President for Security Milt Ahlerich and Arlington, Texas, Chief of Police Theron Bowman on Monday to launch the partnership. Since DHS is also working with federal, state, local and private sector partners to support security efforts at the Super Bowl through additional personnel, technology and resources, Secretary Napolitano took some time to tour the stadium and meet with state and local law enforcement leaders in the areas as well working to protect the throngs of football enthusiasts in the area this weekend.

The “If You See Something, Say Something™” message was also incorporated into a training video for NFL employees, which ensures that both employees and fans alike have the tools they need to identify and report suspicious activities and threats. 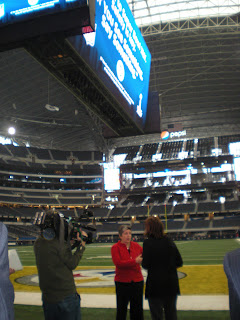 "Security is a shared responsibility and each citizen has a role to play in identifying and reporting suspicious activities and threats," said Secretary Napolitano at a press conference earlier this week. "Our partnership with the NFL and local law enforcement to bring the "If You See Something, Say Something™" campaign to Super Bowl XLV is a critical part of our efforts to ensure the safety of every player, employee and fan in the area for the game."

So whether your wardrobe on Sunday will consist of black and yellow from head to toe, or a stylish cheesehead chapeau, remember that DHS and the "If You See Something, Say Something ™” campaign are hard at work ensuring that Super Bowl XLV remains a fun, enjoyable, and safe environment for everyone involved.

“If You See Something, Say Something ™” used with permission of the New York Metropolitan Transportation Authority