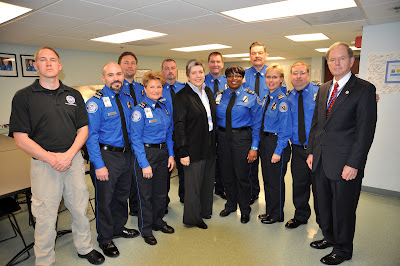 Many of you have followed the heartbreaking stories and recovery efforts coming out of severe weather in the Midwest and Southeast. I wanted to share some of the stories that were brought to my attention.
On April 27, one of the most deadly weather events in U.S. history occurred as tornadoes ripped through America, killing hundreds of people. Our thoughts and prayers are with the people of those regions as they start the process of rebuilding.
The tornadoes on April 27 came about a week after another strong tornado inflicted significant damage in St. Louis, including at the airport.
Out of stories of unspeakable tragedy like these, we often hear stories of great courage by otherwise regular people. We have heard a few of these stories in recent days about the actions of the men and women of TSA at the St. Louis airport and wanted to share a few of them with you.
Imagine a 200mph tornado busting through your workplace. That’s exactly what happened last week to many TSA officers and airline employees in St. Louis. Watch the devastating footage here, and here.
In the midst of all the chaos and confusion, several TSA officers went above and beyond to ensure the safety of their coworkers and passengers.
One officer carried a woman who had frozen in panic to a safe location. Moments later, the glass windows in that area of the terminal imploded sending shattered glass in every direction.
Three other officers came to the aid of EMS personnel by helping them remove two passengers from a tornado damaged vehicle. They held IVs and kept the stretchers steady as the passengers were pulled from the car. The officers also helped carry the stretchers through the debris-strewn parking garage when the ambulance couldn’t get through.
Another officer helped a passenger who was a nurse set up a triage area. The officer helped gather supplies together from first aid kits, helped treat wounds and also tasked other officers with ways they could assist the emergency personnel.
Two other officers initiated the evacuation of a terminal after noticing the windows had started to bow and stayed behind a few extra moments to help direct passengers to safety.
Due to falling glass and other hazards, many officers later assisted passengers with safe exit of the airport after the storm.
This spring’s storms have wreaked havoc in many parts of our nation and many regular people are responding in great ways – as we always do in this country – to help. We are proud of our officers who played a role in keeping people safe in St. Louis last week. 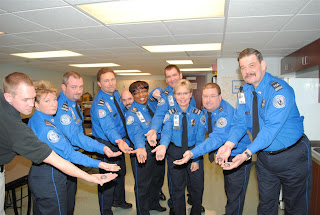 Secretary Napolitano visited the airport last week and commended the officers for their actions and presented them with DHS coins – an honor and a sign of respect in military and government settings.
The response of our crew at STL came as no surprise. This is just one example of the caliber of employees we’ve hired at airports nationwide. They are quick on their feet and ready to respond in the face of chaos when needed.
For more information on recovery efforts from the storms, please visit FEMA’s blog.
Published by the U.S. Department of Homeland Security, Washington, D.C.