DHS Partners on the "If you See Something, Say Something" Campaign with the Pentagon Force Protection Agency 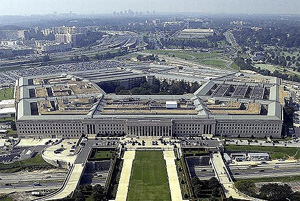 Today we announced that the Department of Homeland Security (DHS) is partnering with the Pentagon Force Protection Agency (PFPA) to expand the “If You See Something, Say Something™” public awareness campaign to help ensure the safety and security of Pentagon employees, visitors, and commuters.

The "If You See Something, Say Something" campaign is a simple and effective program to engage the public and key frontline employees to identify and report indicators of terrorism, crime and other threats to the proper transportation and law enforcement authorities.

Every citizen plays a role in identifying and reporting suspicious activities and threats.  Expanding the “If You See Something, Say Something™” campaign to the Pentagon will help us protect the men and women defending our country, and is an important part of our efforts to secure our nation and engage the American public in keeping our country safe and resilient.

Over the past ten months, DHS has worked with its federal, state, local and private sector partners, as well as the Department of Justice, to expand the “If You See Something, Say Something ™” campaign and the Nationwide Suspicious Activity Reporting (SAR) Initiative — an administration effort to train state and local law enforcement to recognize behaviors and indicators related to terrorism, crime and other threats; standardize how those observations are documented and analyzed; and expand and enhance the sharing of those reports with the Federal Bureau of Investigation and DHS—to communities throughout the country.

Partnerships with the "If You See Something, Say Something" campaign have recently been launched by the National Collegiate Athletic Association (NCAA), the Massachusetts Bay Transportation Authority, the National Basketball Association (NBA) and the National Football League (NFL), as well as in several states including Colorado, Minnesota and New Jersey, more than 9,000 federal buildings nationwide, Walmart, Mall of America, the American Hotel & Lodging Association, Amtrak, the Washington Metropolitan Area Transit Authority, the general aviation industry, and state and local fusion centers across the country.

In March, Secretary Napolitano unveiled the “If You See Something, Say Something ™” public awareness video: