The “If You See Something, Say Something” Campaign Hits the Links

The Department of Homeland Security launched a new partnership with the U.S. Golf Association to bring the “If You See Something, Say Something ™” public awareness campaign to the U.S. Open—an effort that will help ensure the safety and security of spectators, employees, volunteers, and athletes by identifying and reporting suspicious activity. 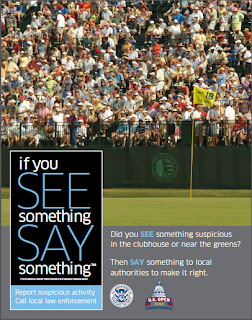 The “If You See Something, Say Something ™” campaign—originally implemented by New York City’s Metropolitan Transportation Authority and now licensed to DHS for a nationwide campaign—is a simple and effective program to engage the public and key frontline employees to identify and report indicators of terrorism and crime to the proper transportation and law enforcement authorities.

In preparation for the U.S. Open this weekend at Congressional Golf Course in Bethesda, MD, the Department conducted briefings for volunteers and security personnel on suspicious activity reporting. Also, posters are up in employee and volunteer areas directing them where to report suspicious activity.

DHS has recently launched “If You See Something, Say Something™” partnerships with organizations such as the National Collegiate Athletic Association (NCAA), the Massachusetts Bay Transportation Authority, the National Basketball Association (NBA) and the National Football League (NFL), Indianapolis 500 as well as in several states including Colorado, Minnesota and New Jersey, more than 9,000 federal buildings nationwide, Walmart, Mall of America, the American Hotel & Lodging Association, Amtrak, the Washington Metropolitan Area Transit Authority, the general aviation industry, and state and local fusion centers across the country.

In the coming months, DHS will continue to expand the “If You See Something, Say Something ™” campaign nationally to help America’s business, communities and citizens remain vigilant and play an active role in keeping the country safe. More information about the campaign is available on DHS.gov.
Published by the U.S. Department of Homeland Security, Washington, D.C.