Secretary Napolitano Visits the Netherlands, Schiphol Airport and the Port of Rotterdam 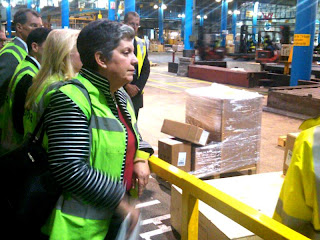 Secretary Napolitano tours the facilities at Schiphol Airport in Amsterdam

Secretary Napolitano is in the Netherlands today to meet with her international counterparts to discuss strengthening collaboration to secure the global supply chain, visit Schiphol airport, meet with U.S. Coast Guard personnel and tour operations at the Port of Rotterdam. As a major hub for passengers and cargo bound for America, the Netherlands is a key ally in the Department of Homeland Security’s ongoing efforts to ensure the safety, security and resilience of our international transportation systems. 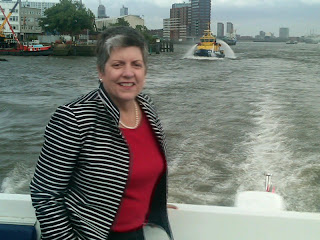 At the Port of Rotterdam – the largest European seaport – Secretary Napolitano met with customs and port officials and toured cargo security operations. This port processes more than 430 million tons of cargo every year and serves as the primary cargo gateway into and out of Europe.  In September 2002, the Port of Rotterdam became the first location for the Container Security Initiative (CSI), a U.S. Customs and Border Protection program at more than 50 overseas ports to prescreen and evaluate high-risk containers before they are shipped to the United States.

The Port of Rotterdam also serves as the home of the U.S. Coast Guard Activities Europe (ACTEUR), which is responsible for ensuring the safety, security and environmental stewardship of the U.S. marine transportation system with operations throughout Europe, the Middle East and Africa. Members of the Coast Guard conduct marine casualty and commercial vessel compliance inspections, work with the international maritime community, and ensure that our maritime partners meet anti-terrorism standards in their ports.

While in Amsterdam, Secretary Napolitano also met with the Netherlands’ State Secretary and Acting Minister of Security and Justice Fred Teeven to underscore the shared commitment of both nations to ensure the resilience of the global supply chain.

We will have another update from the Secretary’s trip tomorrow.