On Wednesday, June 29, members of the DHS Blue Campaign were honored to host the State Department’s 2011 Trafficking in Persons (TIP) Heroes at our headquarters to learn more about their incredible work to help fight human trafficking. Each year, the Department of State honors individuals around the world who have devoted their lives to the fight against human trafficking. These individuals are NGO workers, lawmakers, police officers, and concerned citizens who are committed to ending modern slavery. They are recognized for their tireless efforts – despite resistance, opposition, and threats to their lives – to protect victims, punish offenders, and raise awareness of ongoing criminal practices in their countries and abroad. 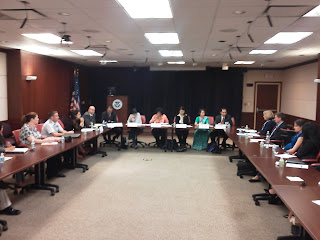 This year’s heroes traveled to Washington D.C. from countries including Bosnia and Herzegovina, Guatemala, Namibia, Nepal, the Philippines and Singapore to share their stories and be honored by Secretary of State Hillary Clinton at the release of the State Department’s 2011 TIP Report on Monday, June 27th.

During the meeting, hosted by Senior Counselor to Secretary Napolitano Alice Hill, the heroes each spoke briefly about their backgrounds and work to help end modern slavery—from Ms. Charimaya Tamang of Nepal, a human trafficking survivor who, at 16, was the first person in Nepal to personally file a human trafficking case with the Nepalese district police and eventually won her case in a landmark decision, to Mr. Leonel Dubon from Guatemala, who established the Children’s Refuge House, which provided shelter and services to 51 girls in 2010 alone. Ms. Bridget Lew Tan, a TIP Hero from Singapore who whose Humanitarian Organization for Migration Economics has provided food, shelter, advocacy and legal counsel to more than 50,000 migrants since 2004, spoke to the need of governments to make NGOs equal partners in anti-human trafficking efforts.

These stories help shed light on the state of international efforts to end human trafficking throughout the globe, and provided important insight into how differences in government structure, culture, and public resources can play a role in each society’s anti-human trafficking efforts.

The discussion was candid and, for many Blue Campaign members, touching. Senior Counselor Hill closed the session by noting that many of the members of the DHS Blue Campaign work “behind desks” for the majority of their workday. “Sometimes it is hard to believe you are making a difference,” Senior Counselor Hill said to the TIP Heroes, “but meeting with all of you today, who work tirelessly and directly with victims across the globe, we are reminded that, yes, with commitment and passion each of us can make a difference.”