Secretary Napolitano was in Vienna today to meet with her international counterparts and deliver remarks to a joint meeting of the Organization for Security and Cooperation in Europe (OSCE) Permanent Council (PC) and Forum for Security Cooperation (FSC)—the world’s largest regional security organization. 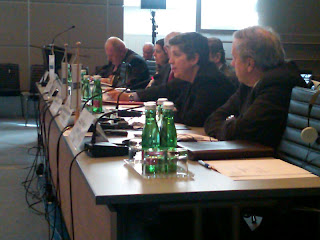 She underscored the Obama administration’s commitment to partnering with the international community on issues such as preventing and combating terrorism, improving border security and management, fighting the illicit trafficking of drugs, countering the proliferation of weapons of mass destruction (WMD), and strengthening cybersecurity initiatives.

During her remarks, the Secretary highlighted the Department’s work with the OSCE to further strengthen international efforts and to address transnational threats and support OSCE programs to fight terrorism and violent extremism while ensuring a continued respect for human rights and fundamental freedoms. 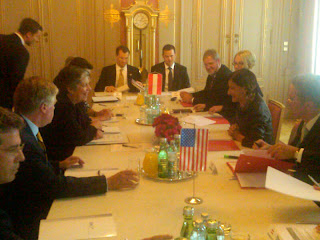 While in Vienna, Secretary Napolitano met with Austrian Interior Minister Johanna Mikl-Leitner to discuss the close collaboration between the United States and Austria to combat terrorism. She highlighted the important role that information sharing, including the analysis of Passenger Name Record (PNR) data, plays in protecting the traveling public against acts of terrorism and combating serious transnational crime. She also reiterated the Obama administration’s continued commitment to strengthening security while protecting the individual privacy of passengers.

After her official meetings, the Secretary joined Ambassador Davies and staff from the U.S. Embassy at an early 4th of July Celebration wrapping up her trip to Spain and Austria.
Published by the U.S. Department of Homeland Security, Washington, D.C.