Secretary Napolitano traveled to New York on Aug. 4-5 to commemorate the U.S. Coast Guard’s 221st anniversary aboard the U.S. Coast Guard Barque EAGLE. The EAGLE—built in Hamburg, Germany in 1936, was repatriated to the United States after World War II—known as "America's Tall Ship," is the only commissioned sailing ship operating in the U.S. government fleet, and is used to train Coast Guard Academy cadets and officer candidates prior to their commissioning into the U.S. Coast Guard. 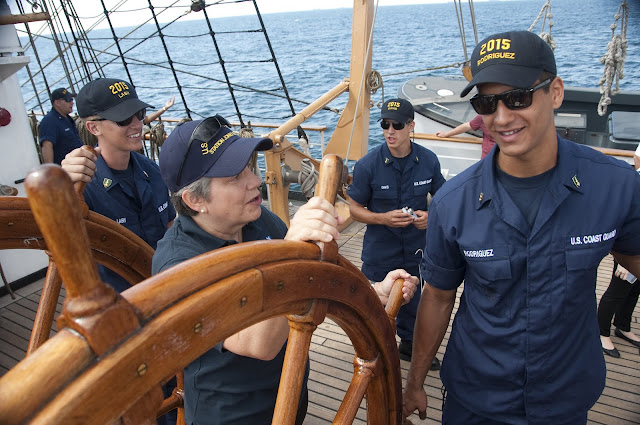 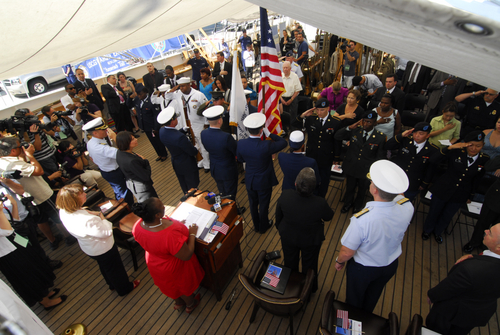 Every year, the USCIS New York Field Office conducts a number of special naturalization ceremonies at landmark locations in the New York area. This year, Secretary Napolitano had the honor of administering the Oath of Allegiance to citizenship candidates currently serving in the U.S. military and represented all five branches of the military—the U.S. Army, Navy, Air Force, Marine Corps and Coast Guard. Originally from countries such as Burma, The People's Republic of China, the Dominican Republic, Guyana, Haiti, Mexico, Peru, and Russia—today these men and women joined the ranks of over 72,000 members of our armed forces to be naturalized by USCIS since September 2001.
Published by the U.S. Department of Homeland Security, Washington, D.C.