Last night in New York City, I had the great honor of awarding the DHS Distinguished Public Service Medal to Rick Rescorla, a hero of 9/11 who gave his life helping his colleagues safely evacuate the World Trade Center. 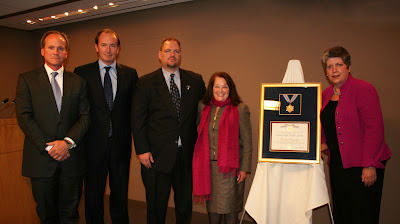 Rick’s story is one that continues to inspire many of us at DHS and across the homeland security enterprise. It also serves as a model of the importance of individual, business, and community preparedness and resilience, and the role that each of us plays in meeting our shared responsibility for security.

Rick served as head of security for Morgan Stanley and its more than 2,700 employees who worked in the World Trade Center. He was present during both the 1993 and 2001 terrorist attacks, and consistently held exercises and drills to ensure that his fellow employees knew what to do if there was an emergency.

Rick believed, as we do at DHS, that in an emergency, the public is not a liability to be protected, but an asset to be engaged. Rick expected his fellow employees to take preparedness seriously and challenged them to be personally responsible for their own safety.

Because of his tireless efforts, nearly every Morgan Stanley employee safely evacuated the South Tower on 9/11. And while Rick could have joined them, he continued to help others evacuate the building and ultimately gave his life. Rick’s wife Susan and his son Trevor accepted the award on his behalf.

In addition to awarding Rick the Distinguished Public Service Medal, I also announced the creation of a new award inspired by his legacy: the National Resilience Award. The National Resilience Award is DHS’s first national award on resilience. It will be given to individuals, organizations, or communities that have shown leadership in building resilience in their communities. It will also recognize superior leadership and innovation in helping to build a national culture of resilience, with a focus on effective preparation, response, and recovery in the face of disasters.

Rick Rescorla's story is one that has inspired so many, and provides a powerful message to us all: in the preparedness of each of us, we can secure the nation for all of us.
Published by the U.S. Department of Homeland Security, Washington, D.C.