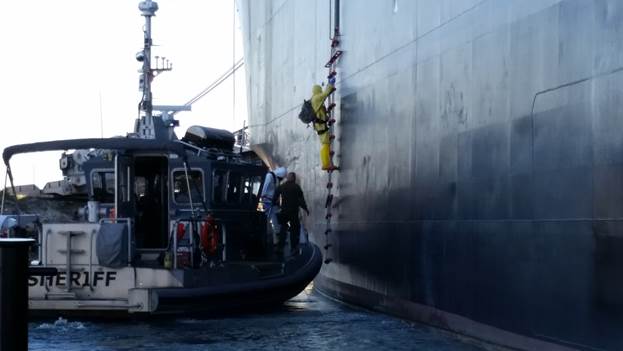 This week the Domestic Nuclear Detection Office (DNDO) participated in a successful land-based and maritime exercise of the National Technical Nuclear Forensics Ground Collections Task Force, whose mission is to collect vital forensic evidence in the immediate aftermath of a nuclear detonation to assist in determining the responsible entity.  The task force, comprised of members from the Department of Defense (DoD), Department of Energy (DOE), and the Federal Bureau of Investigation (FBI), collects debris samples near the site of the detonation for analysis at designated laboratories.

Exercise Prominent Hunt 15-2, which took place in Southern California earlier this month, simulated a nuclear detonation near the ocean.  For the first time, the task force had to coordinate the collection of forensic evidence at sea. Nuclear forensics serves as the technical pillar of nuclear attribution, which fuses law enforcement, intelligence, and nuclear forensics information to identify the source of the device and the persons or groups responsible for its use in acts of terrorism.

Prominent Hunt 15-2 involved extensive collaboration among federal and local partners, including the Los Angeles Sheriff’s Department (LASD). As they would in responding to a real event, DOE, DoD, and the LASD  deployed air assets with aerial radiation detection and mapping equipment to ascertain radiation levels from a nuclear detonation. These assets helped to ensure the collection of optimal evidence samples as well as the safety of the task force and other responders. The LASD was the first agency on-scene, where they gathered initial radiation level data with their helicopter-mounted detection system and, upon the arrival of federal assets, integrated into the DOE-managed aerial detection operations.  The DOE flew its Aerial Measurement System equipment on their fixed wing and rotary wing aircraft. The DoD 244th Aviation Brigade also practiced with the DOE Aerial Measurement System as well as the DoD 20th CBRNE Command Airborne Radiological Detection, Identification, and Measurement System.

Throughout the exercise, DNDO collaborated with federal and local partners for a successful exercise. Exercises such as these support DNDO’s mission to help ensure the nation’s nuclear forensics capabilities are prepared to respond to nuclear threats. 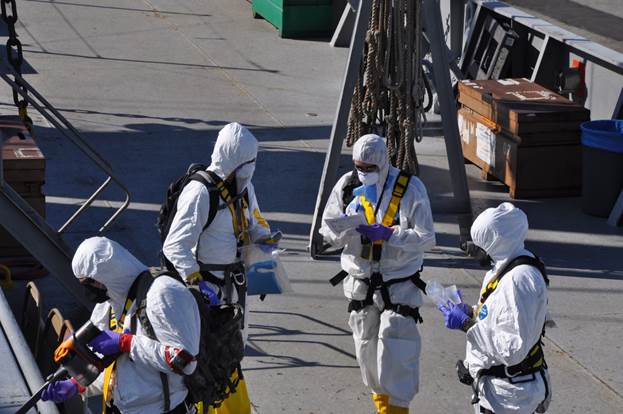 Members of the task force collecting simulated debris samples from the SS Lane Victory. (Photo courtesy of the Federal Bureau of Investigations)