In the period of weeks following the terrorist attacks in Paris on November 13 and the terrorist attack in San Bernardino on December 2, officials of Homeland Security, the FBI, the intelligence community, state and local law enforcement and homeland security officials have been in a heightened state of readiness to protect our homeland. People are anxious now. They should know, they need to know what their government is doing to protect our homeland.

First, as the President explained on Monday at the Pentagon, we’re engaged in a bombing campaign against the Islamic State in Iraq and Syria to take the fight directly to that terrorist organization. This has included training and equipping ground forces in Iraq and Syria.

Two, law enforcement and the FBI do an excellent job virtually every day of protecting, investigating, interdicting, prosecuting, and preventing terrorist threats to our homeland. Arrests are made on a regular basis.

Four, with regard to potential travel and immigration to the United States of those who may be suspected of terrorism, last year and again this year, I directed a series of security enhancements to our so called Visa Waiver Program. I am pleased that Congress is also involved in this effort to strengthen our ability to enhance the security of our Visa Waiver Program. We routinely deny boarding and travel to those with potential terrorist connections into this country. At the State Department and at the Department of Homeland Security we have in place now a multi-layered, thorough process for vetting refugees for resettlement in this country. This is particularly true with regard to Iraqi and Syrian refugees. The process is multi-layered, thorough, and takes on average 18-24 months to complete for every single refugee. This includes consulting databases, agencies, law enforcement, and the intelligence community. As you heard the other night, the President has directed the State Department and the Department of Homeland Security to also conduct a review of the K-1 Visa process, visas for fiancées, which we are doing. Under my leadership as Secretary, we in fact began to consult social media in connection with conferring various immigration benefits and we’ll be doing more of this. Any reports or partial reports to the contrary are simply false.

Five, since last year, we enhanced our Federal Protective Service at a number of Federal buildings around the country.

Six, we continue to share information with state and local law enforcement around this country with regard to what we are seeing at the Federal and international level. Director Comey and I routinely do this and we’ll be doing this again later this week in our communication with law enforcement nationwide.

Seven, we continue to share information with private stakeholders such as business organizations, sports organizations, the NCAA for example, the NBA, the NFL for the same purpose – to share what it is we see.

Eight, as should be obvious this holiday season in particular, there is a heightened security and law enforcement presence at public events and public places across the country. Law enforcement, national security, homeland security personnel are working overtime to protect the American public and to protect the homeland.

In 2002, we went to the color bars. Everyone remembers the color bars: severe, high, elevated, guarded, low. One of the issues with the color bars was that there was very little public commentary to go with them and there’s a certain de-escalation factor here. Once you elevate, it’s difficult to de-escalate. In 2011, we did away with the color bars and created the National Terrorism Advisory System. The National Terrorism Advisory System has two levels to it, an “Elevated Alert” and an “Imminent Alert.” This system has never been deployed. It depends upon, for an “Elevated Alert,” a credible, terrorist threat, which to give you any guidelines means something very specific. An “Imminent Alert” warns of a credible, specific, impending terrorist threat against the United States. This in my judgment does not work in the current threat environment because it depends upon a specific, credible, terrorist threat to something in the homeland. This system has never been deployed. It’s time we change the system, and this is what we are doing and announcing today.

We are creating an intermediate level to the NTAS system that includes an NTAS Bulletin that describes general developments or trends regarding threats of terrorism. We do this in public speeches and public statements. We do this for law enforcement with Joint Intelligence Bulletins. We do this on a periodic basis. There are news leaks, anonymous sources from national security and law enforcement. We want to put in one place for the public to see what we are seeing concerning the homeland and what we are doing about it and what the public can do about it. So today we are creating this new intermediate level to the NTAS system called an NTAS Bulletin. 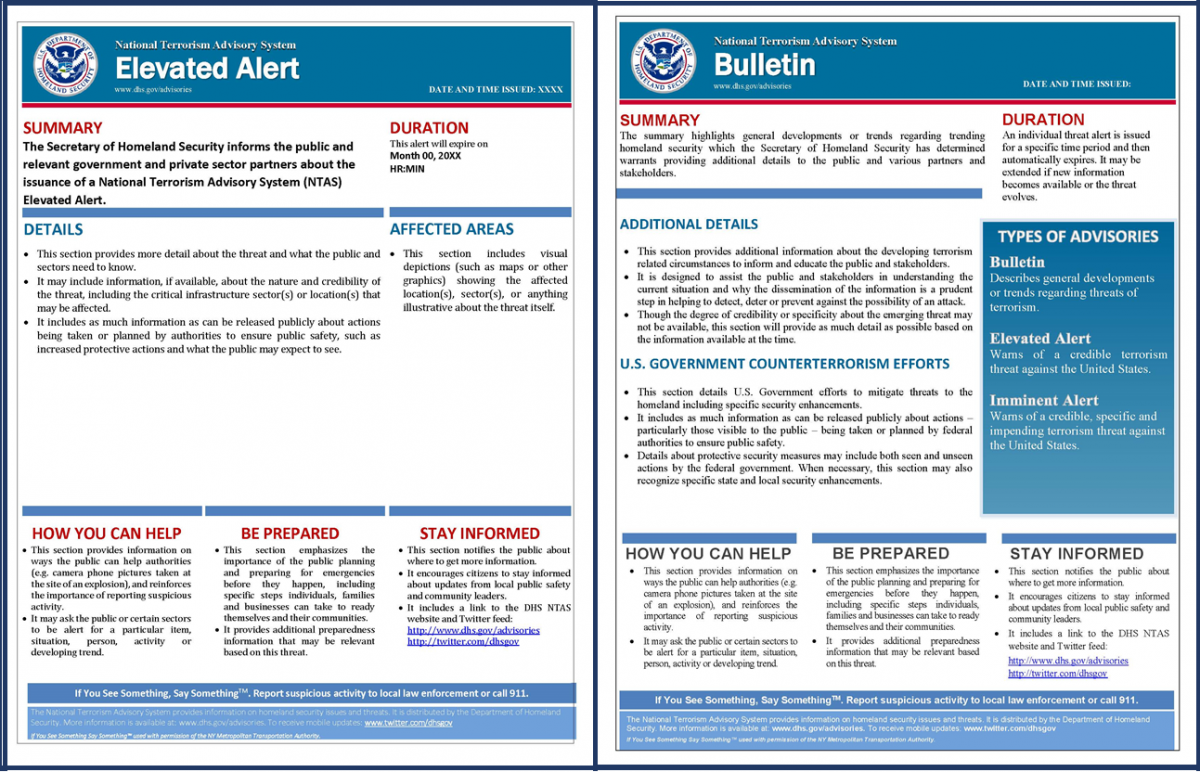 Example Template for an Elevated NTAS Alert and NTAS Bulletin

This is a template for an Elevated NTAS Alert, which we have never used in the history of this system. This is an “Elevated Alert,” which again depends upon a credible, specific threat. This is the template for a Bulletin, which we are announcing today. This is general information for the public about the current threat environment, what we see, additional details, what the government is doing about it, and how the public can help. With today’s announcement, we are also issuing an actual NTAS Bulletin. The duration for this Bulletin—and these Bulletins should have a duration—will be six months, till June 16, 2016, from today. And in summary, what we are informing the public today, in this Bulletin, which will be issued today, is the following:

We are in a new phase in the global terrorist threat, which has implications on the homeland. Particularly with the rise and use by terrorist groups of the internet to inspire and recruit, we are concerned about the self-radicalized actors that could strike with little or no notice. Recent attacks and attempted attacks internationally and in the homeland warrant increased security as well as increased public vigilance and awareness.

Though we know of no intelligence that is both specific and credible at this time of a plot by terrorist organizations to attack the homeland, the reality is that terrorist inspired individuals have conducted or attempted to conduct attacks in the United States this year. DHS is especially concerned that terrorist inspired individuals and homegrown violent extremists may be encouraged or inspired to target public events or places. As we saw in the recent attacks in San Bernardino and Paris, terrorists will consider a diverse and wide selection of targets for attacks. In the current environment, DHS is also concerned about threats and violence directed at particular communities and individuals across the country based on perceived religion, ethnicity, or nationality.

DHS and the FBI are providing additional guidance to state and local partners on increased security measures. The public should expect an increased presence of law enforcement across communities in the weeks ahead. More stringent security should also be anticipated at public places and events. This may include a heavy police presence, additional restrictions and searches on bags, and the use of screening technologies. The FBI is investigating potential terrorism related activities associated with this broad threat throughout the United States. Federal, state, and local authorities are coordinating numerous law enforcement actions and community outreach to address this evolving threat.

How you can help: community leaders, coworkers, friends, and family can help by recognizing signs of potential radicalization to violence. For more information, visit https://nsi.ncirc.gov/. Report threats or suspicious activity to the FBI or your local authorities. Contact information for FBI field offices can be found at http://www.fbi.gov/contact-us/field.

The U.S. Government will provide additional information about any emerging threat as additional information is identified and not necessarily on a six month timeline. The public is encouraged to listen to local law enforcement and public safety officials. Finally, we urge Americans to continue to travel, attend public events, and freely associate with others but remain vigilant and aware of surroundings while doing so, particularly during this holiday season. 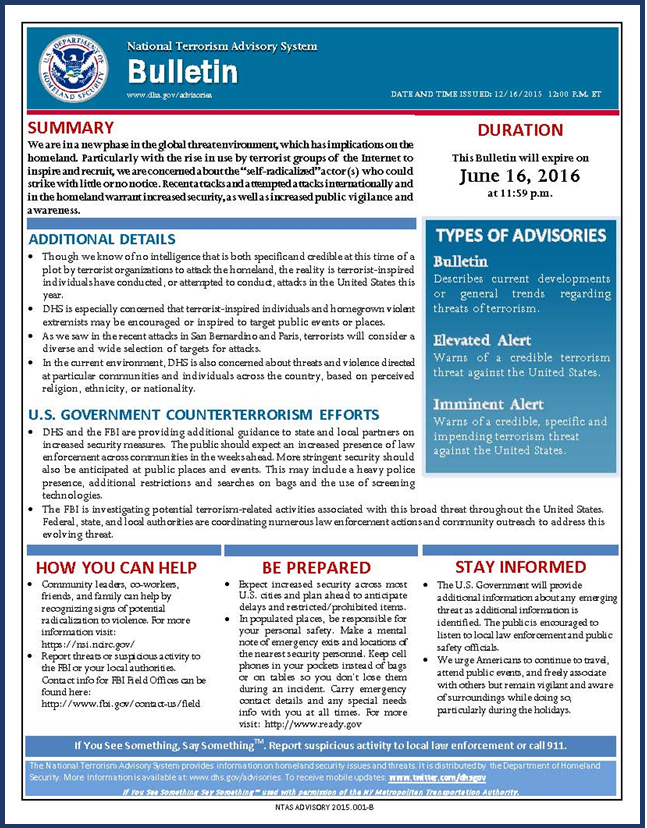 Home > Archive > News Archive > Remarks by Secretary of Homeland Security Jeh C. Johnson on an Update to the National Terrorism Advisory System – As Delivered
Back to Top