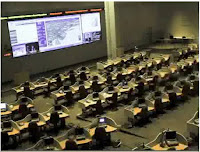 Secretary Janet Napolitano’s speech today to the International Association of Chiefs of Police (IACP) in Orlando, Fla., is a good opportunity to update the American public on the important role that state and major urban area fusion centers are playing in keeping our country safe.
Fusion centers grew out of a recommendation of the 9/11 Commission, which found that the federal government had no systematic way for sharing information and intelligence with state and local governments.
Today, we have a national network of 72 recognized fusion centers – one in every state and 22 in major urban areas – and, with Department of Homeland Security support, they are being woven into the national and homeland security fabric of the United States.
What does that mean for the American people? It means you now have a dedicated and well-trained group of men and women in your own communities, working with DHS, FBI, and other federal partners, to keep your police officers, firefighters, public health and safety officials, and other first responders informed about terrorist, criminal, and other homeland security threats.
The DHS Office of Intelligence and Analysis, where I serve, takes information and intelligence from across DHS and the national Intelligence Community, processes and analyzes it, and then shares it with the fusion centers, often in joint products with the FBI. The fusion centers then disseminate it to the some 18,000 state, local, tribal, and territorial law enforcement organizations, and to thousands more first responders throughout the country. They also support the FBI-led Joint Terrorism Task Forces in their terrorism investigations.
Conversely, fusion centers provide the federal government with critical information and subject‐matter expertise from the state and local level, enabling the effective communication of locally-generated information about terrorism back to Washington.
Fusion centers have already proven their value in countering terrorist attacks. For example, they played important roles in the case of the attempted Times Square bombing by Faisal Shahzad and the plot to bomb New York subways by Najibullah Zazi.
DHS is working with each center to improve its baseline level of operational capability. Through the use of grant funding, each center is expected to achieve and maintain the capacity to receive and share threat-related information generated by the federal government, as well as the capacity to gather, assess, analyze, and share suspicious activity reports generated by local law enforcement and the private sector. These same baseline capabilities also ensure that fusion centers establish and maintain privacy and civil liberty protections.
In addition, the DHS Office for Civil Rights and Civil Liberties, and the DHS Privacy Office, provide privacy, civil rights, and civil liberties training to all DHS intelligence officers before they deploy to the fusion centers, and support the training of all fusion center personnel nationwide.
Secretary Napolitano has talked about how our homeland security begins with hometown security.  Fusion centers are vitally important tools for keeping both our home towns, and our homeland, safe.
Bart R. Johnson
Principal Deputy Under Secretary for Intelligence and Analysis
Department of Homeland Security
Published by the U.S. Department of Homeland Security, Washington, D.C.