Editor's Note: This blog was originally posted by the Transportation Security Administration on November 14.

Yesterday, TSA and the DoD announced a partnership to expand TSA Pre✓™ expedited screening benefits to more than 2.6 million U.S. Armed Forces service members in the Air Force, Army, Coast Guard, Marine Corps, and Navy, as well as the Reserves and National Guard.

Currently, members of the U.S. Armed Forces can use TSA Pre✓™ lanes at 10 domestic airports by presenting their Common Access Card (CAC). Starting December 20th, these individuals will be able to enjoy the benefits of the program at the 100 participating airports across the country, allowing them to keep their footwear on as well as light outerwear, laptop in its case and their 3-1-1 compliant liquids/gels bag in a carry on in select screening lanes.
Under this partnership, all active duty, U.S. Coast Guard, Reserve and National Guard service members are recommended to:

Check the back of your CAC for your DoD ID number.

Enter the DoD ID number in the Known Traveler ID field when booking your flight. 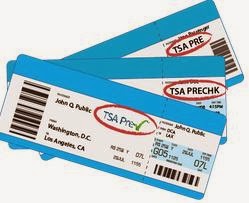 Check your boarding pass. It should have a TSA Pre✓™ logo if you’re traveling after December 20. If you try to print your boarding pass prior to December 20, you may not see the TSA Pre✓™ indicator.
When arriving at the airport, service members will then be permitted access to TSA Pre✓™ lanes for official or leisure travel on participating airlines. Service members do not need to be in uniform to benefit from TSA Pre✓™. If you are traveling with children 12 and under they may accompany service members through the TSA Pre✓™ lanes. However, spouses will need to be enrolled in a trusted traveler program to participate. TSA will always incorporate random and unpredictable security measures throughout the airport. No individual will be guaranteed expedited screening.
TSA has long recognized our men and women in uniform as nearly a quarter of TSA’s workforce is a veteran or currently serves as an active duty service member in the U.S. Armed Forces.
Click here for more information about TSA Pre✓™.