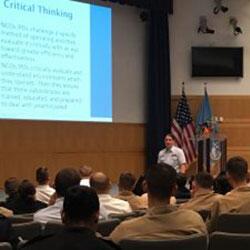 Every year the Coast Guard awards a chief petty officer – active duty and Reserve – the MCPO Angela M. McShan Inspirational Leadership Award. Master Chief Petty Officer Angela McShan was the first African American woman advanced to master chief petty officer, serving over two decades with devotion and distinguished leadership. She served as an instructor at the Chief Petty Officers Academy, which she helped to establish, and was slated to become the chief of Yeoman “A” school prior to her death in 2000.

The following is text from Simonetti’s award nomination letter:

“Mentoring and guiding others is at the absolute heart of leadership and there is no one who had a more impactful direct role in 2017 than SKC Simonetti. SKC Simonetti identified a need for a CG mentoring program and pursued it with unparalleled tenacity. She researched the possibilities, developed relationships and connections with the DHS mentoring program, worked with Coast Guard Academy mentoring program leadership and overcame naysayers. Ultimately she implemented a beta test program with over 80 participants including a diverse group from the enlisted, officer and civilian components of the workforce. She sought out and acquired funding…and was able to obtain DHS in-person training for all participants. Based on the overwhelming response and strong linkage to the DHS program requirements, CG-12C is analyzing the beta test for possible implementation CG wide. The participants of the program are seeing growth and increased personal skills and leadership development that will positively impact the Coast Guard for years to come, both at an individual and service wide level.”

Simonetti drew from a wealth of personal experiences to help develop the mentoring project.

“Over the course of my 13-year career I’ve witnessed many junior enlisted struggle through personal and professional hurdles that could easily have been alleviated by structured guidance and connection, perhaps from outside of their command, in a climate of non-judgment,” said Simonetti.

Simonetti said she experienced her own personal hurdle when she became pregnant with her first child as an E-6 at a remote unit. The competing aspirations of motherhood and her career weighed heavily on her mind. She felt as though she did not have any accessible guidance from people who had gone through a similar experience.

“People want to connect and are more content in their careers when they feel connected with others,” said Simonetti.

Simonetti is passionate about mentoring, and her goal is to have a firmly established Coast Guard-wide mentoring program. With leaders like Simonetti leading the way, that goal is definitely within reach.

The Inspirational Leadership Awards annually recognize active duty and Reserve officers, enlisted members, civilians and auxiliarists. These awards are presented to members who best exemplify the Coast Guard’s core values of Honor, Respect, and Devotion to Duty, foster a culture of diversity, mentor both junior and senior personnel to their highest potential, and leads and motivates by example. To learn more about the awards, please visit the Office of Leadership website.