And just like that, somehow it is December again. I have found that the end of the year is a great time for making lists. I am not talking about the naughty or nice list that Santa checks twice, but lists of accomplishments, areas of 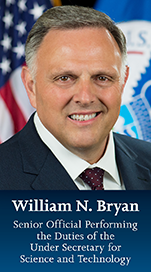 improvement, and goals for the coming year. As I sit down with a glass of eggnog to reflect on this past year and all the great work the men and women of the Science and Technology Directorate (S&T) have done to better the Department of Homeland Security (DHS) Components and our nation’s first responders, I would like to share a few of the many accomplishments on my list.

DHS is one of 11 federal agencies that participate in the Small Business Innovation Research Program (SBIR). Fifteen years and 34 solicitations later, this past June, the DHS SBIR program awarded it’s 1,000th contract award. The DHS SBIR program works with U.S. small businesses to develop new and innovative technologies in support of homeland security needs. Reaching this milestone is significant and shows our commitment to an innovative future.

This summer, S&T participated in two collaborative efforts through Federal Emergency Management Agency’s (FEMA) Shaken Fury 2019 Operational Exercise. The first was a joint effort with FEMA, the Central United States Earthquake Consortium, U.S. Department of Defense, the National Guard, state and local government agencies, NGOs, and the private sector in a large-scale and complex exercise to test current capabilities and train with additional resources in the event of a large earthquake striking Middle America. The second was through a partnership with S&T’s Next Generation First Responder Program and the City of Birmingham and Jefferson County, Alabama to prepare for the 2021 World Games. S&T was able to train first responders on various technologies that have been developed to better protect and connect them in a disaster response scenario and integrate real-time field reporting capabilities. A year-and-a-half ago, S&T set out on a path to bring cutting edge technology to one of the largest and most complex exercises. This summer, that was accomplished.

This year S&T made great strides in our efforts to apply advanced analytics to support the Department’s efforts to target human and drug smuggling networks and break up criminal enterprises that traffic in the exploitation of humans. As a result of project Igloo, an entire smuggling organization was brought down, with 61 apprehensions, 10 felony reentry prosecutions, the seizure of thousands of dollars, and the identification of hundreds of new leads.

At the beginning of 2019, S&T partnered with U.S. Customs and Border Protection (CBP), the United States Postal Inspection Service (USPIS) and the Office of National Drug Control Policy (ONDCP) to put out a call for new technologies to help disrupt the flow of opioids into the United States through international mail. Last week, we were proud to announce the winners of this challenge. Through this collaborative initiative, we plan to continue working with these winning technologies to further develop prototypes and establish follow-on production agreements with an end goal of the government deploying these tools in international mail facilities. This is definitely a great way to end a year of incredibly hard work.

Please note, while I have highlighted a few programs and milestones that I am incredibly proud of, for every one that is listed, there are dozens more. The work that S&T does is in support of the men and women who work tirelessly to keep our communities and our country safe.

I encourage you to take a look at our Newsroom and read through the different articles or watch one of our videos. Each one represents a programmatic or technological achievement that would not be possible without our staff, our partnerships with the government, private sector and academia, and our drive to develop innovative technology.

I raise my glass of eggnog to all of you who have worked with us this year. Job well done! On behalf of everyone at S&T, a very special thank you to those who have given their time, energy, and lives to protect our homeland!