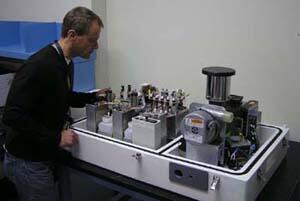 (November 2007) If James Bond were a homeland security agent, Q would arm him with the BioBriefcase. If the villain Goldfinger ever tried to unleash deadly pathogens, Bond would flip off the lid of the BioBriefcase, quickly detect the germs, and notify authorities to limit any harm. Lives saved and evil defeated…until the next Bond adventure.

In the real world, however, the villains are terrorists and the threat of a biological attack is far from fiction. Luckily, the BioBriefcase works in much the same way, and it really can save lives.

Funded by the Department of Homeland Security's (DHS) Science and Technology Directorate (S&T), the BioBriefcase was developed by scientists and engineers at Lawrence Livermore and Sandia national laboratories. It’s a product of a comprehensive DHS effort launched in 2003 to deploy a network of biomonitors, detectors, and warning systems. The Nation needs to be prepared in the event of an attack using a harmful or deadly biological agent, such as anthrax or another type of bacteria, virus, or toxin. BioWatch technologies are also significant products of this effort.

The BioBriefcase is a portable option for the biodefense arsenal. It’s only about the size of a large suitcase, and it can be placed in hard-to-reach areas such as air ducts. It can also conduct a bioanalysis within about an hour of receiving a sample, giving emergency responders a vital early warning of a possible attack.

According to Lawrence Livermore, the BioBriefcase can play a critical role as an affordable tool for many kinds of civilian applications. It can be used by first responders, homeland security companies, and agriculture operations, or even for the purpose of environmental monitoring in factories or office buildings.

“Our team is particularly proud of the system’s performance in field trials late last year,” said Lawrence Livermore chemist Chris Bailey, who has directed much of the system’s development. “For the future, we’re looking for new opportunities for biological monitoring and further advancing the technology.”

The BioBriefcase uses state-of-art technologies to collect, process, and analyze samples. It can detect as well as identify genetic and protein signatures of agents. It can also be converted into a bench-top instrument for medical diagnosis and scientific research, with built-in capabilities for autonomous sampling and processing. Lawrence Livermore is looking for industry partners to help commercialize the BioBriefcase and, maybe, equip an army of James Bonds to take on the villains.

To request more information about this story, please e-mail st.snapshots@hq.dhs.gov.