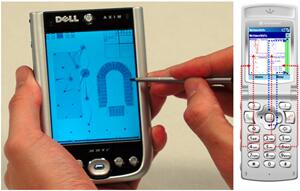 (June 2007) Football can save lives. Well... not exactly. But researchers at Purdue University are thinking just that when the Boilermakers are at home, playing in Ross-Ade Stadium. In particular, DHS-sponsored scientists at the school are looking at how fans in the stands are able to watch replays and view game stats, right on their smartphones and PDAs. The scientists want to use the same kinds of sensor technologies to show where people, exits, and critical lifesaving equipment are located during an emergency.

These are experts who study complex ways in which information is displayed, and they want to create easy-to-use visual tools for homeland security. “We want to help first responders,” says Purdue’s David Ebert, who directs the research. “A lot of firefighters are asking for ways to get and view data on their handhelds--in real time--about what’s going on inside stadiums and big buildings. It’s a major need.”

Ebert leads Purdue’s Regional Visualization and Analytics Center, which is part of the university-based DHS Centers of Excellence, managed by the S&T Directorate’s Office of University Programs. He and his team have been analyzing eStadium, a collaborative project among scientists and technicians at the university; it delivers on-demand information about football games to fans over a wireless network. The researchers are seeking to answer questions like “How well does the network perform?” “What is the most meaningful way to display the data?” and “How can network engineers easily curb noise or other kinds of interference?”

With eStadium as their test bed, the team is now trying to develop ways to let first responders glance at their handheld devices to clearly and quickly see how the crowds are concentrated and where the equipment and exits are. Techniques would then be needed to sort through all of the information, make sense of the crowd patterns, and display it simply on a small screen. Such technologies would be especially valuable if an evacuation is needed during a large sporting event such as the Super Bowl.

Although more research is needed, Ebert is hopeful that the project will soon move into development. The goal, he says, is to produce off-the-shelf, affordable technologies that would be available to all types of fire departments and emergency crews.

To request more information about this story, email st.snapshots@hq.dhs.gov.