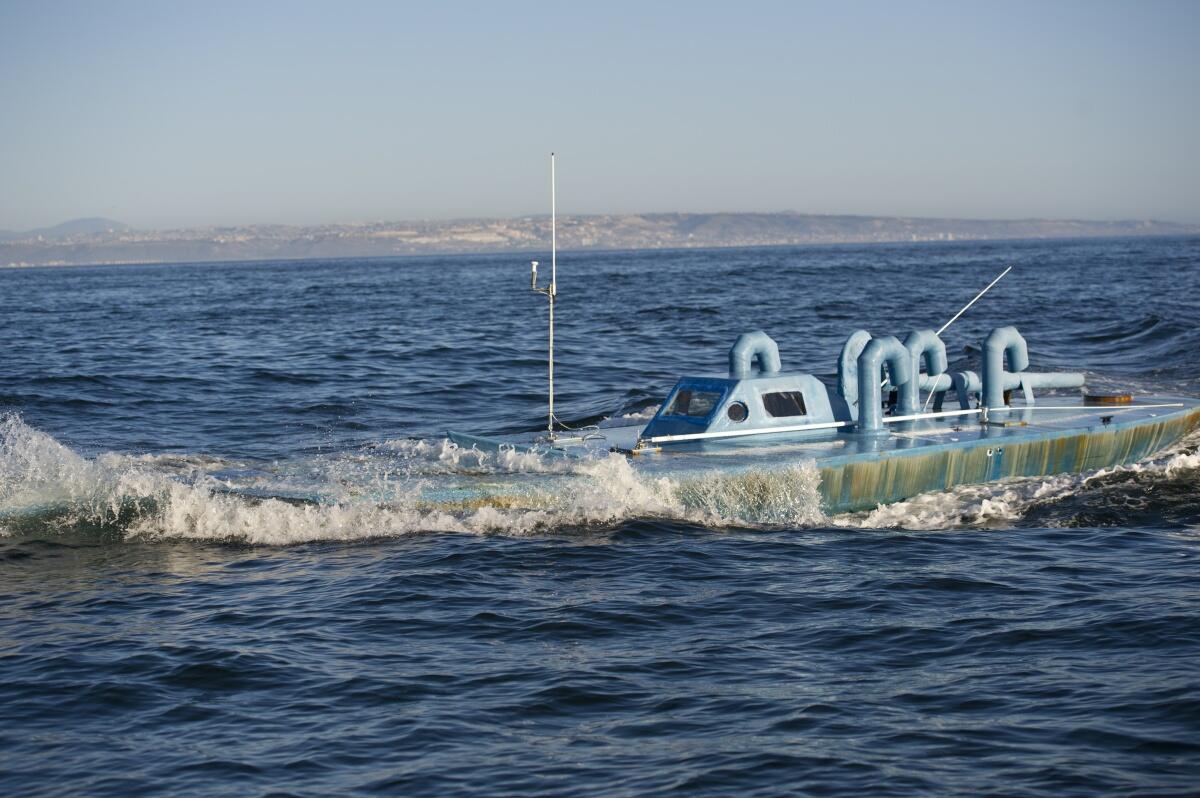 Surrogate semi-submersible engineered to mimic the design of the “dark vessels” being used to bring narcotics and other illicit cargo into the United States.

With low profiles and low radar reflectivity, stealthy, drug-running semi-submersibles, "narco subs," built in southern jungles cut through the ocean at wave height and are nearly impossible to detect.  DHS' semi-submersible mimics them so that  a variety of sensors can be tested  in the battle  against illegal drug-running.

The erstwhile planet Pluto (now officially an asteroid) was known for decades as a small, dark planet—hidden, difficult to spot, and on a quiet, determined course all its own.  And so, when the DHS Science and Technology Directorate (S&T) needed a target semi-submersible to detect the hidden but determined maritime smuggling operations of the South American drug cartels, it created its own vessel and called it “PLUTO,” after the planet that is so difficult to spot.  S&T’s PLUTO is a small, semi-submersible that is representative of what are popularly called “narco subs,” and serves as a realistic practice target for the detection systems of DHS and its national security community partners.

In the early 90’s, South American drug cartels came up with a new tactic to transport narcotics destined for the United States: small, radar-dodging, self-propelled, semi-submersibles (SPSSs).  Although clandestine semi-submersibles were rumored to exist in the mid-1990s, many believed them to be a myth, hence their name Bigfoots.  Then in 2006, an actual Colombian semi-submersible was captured by the U.S. Coast Guard in the Eastern Pacific Ocean.  Today, drug cartels continue to build their “narco subs.”  With low profiles and low radar reflectivity, these illegal, stealthy, drug-running semi-submersibles cut through the water at wave height and are nearly impossible to detect.

S&T built PLUTO in 2008 to serve as a surrogate SPSS with many of the same features as the vessels built by the cartels.  It is used as a target by DHS and its national security community partners to help test the performance of detection systems and give operators of those systems real world experience under controlled conditions.  This testing helps develop new concepts of operation for seaborne, airborne, and space-borne technologies to spot illegal vessels.

“Small surface vessels, self-propelled semi-submersibles, and now the most recent innovation of fully submerged vessels (FSVs), pose significant challenges to maritime security,” says Tom Tomaiko of S&T’s Borders and Maritime Security Division.  “While some small boats sitting low in the water have legitimate purposes, there are many that are used for illicit purposes

Dozens of these boats have been captured by the U.S. and partner nation law enforcement agencies in the last few years, sometimes with their cargo still on board, sometimes after it has been thrown overboard.  “When the crews become aware they’ve been spotted, they will typically scuttle the boat immediately, knowing they’ll be rescued by us anyway,” says Tomaiko.

Meanwhile, cramped living conditions within the illegal SSPSs can be horrendous.  There is generally only 3” of space above the waterline, meaning the ride can be very rough.  The small crews of 3 or 4 have little to eat, poor air quality, no toilet facilities, operate with little rest until they reach their destination, and are sometimes watched over by an armed guard.

If the mission is undetected and the drugs successfully delivered, the vessel is typically scuttled and not reused.  “Drug-running is lucrative.  It is cheaper to simply build another vessel than to run the risk of trying to get a vessel and its crew home,” says Tomaiko.

In a typical operation, PLUTO will operate at SPSS cruising speeds of 4 to 8 knots while remote sensor platforms from sea to space attempt to detect and track it at various distances and observation angles.

S&T’s PLUTO is home-ported at Eglin Air Force Base, near Fort Walton Beach, Florida, and is maintained by the Air Force’s 46th Test Squadron.  Various civilian and military agencies, including the U.S. Coast Guard, Customs and Border Protection/Air and Marine (CBP/OAM), U.S. Navy, U.S. Air Force, and other national agencies have tested their remote sensing capabilities against PLUTO in the Gulf of Mexico, the Atlantic, and the Pacific.

In 2009, Customs and Border Protection tested its Dash 8 maritime surveillance aircraft against PLUTO at the Eglin range and near Key West, Florida. These results helped gage the performance of the Dash 8’s SeaVue radar against PLUTO and helped determine detection distances and aspect angles for optimal mission performance. In addition, the U.S. Navy tested one of its P-3 aircraft equipped with maritime surveillance radar system against PLUTO. All such tests were instrumental in helping to verify the performance of sensor capabilities, and provided operators with real-world training which will help determine future tactics.

PLUTO is just over 45 feet long, can run roughly 10 knots at maximum speed and can hold a crew of 3 to 4, although it usually operates with only one for safety reasons.  It has VHF and HF radios, and the 46th Test Squadron can install other types of radios and maritime automated identification system (AIS) equipment to meet testing or safety requirements.  Conditions onboard, however, were primarily influenced by the need for crew safety, so PLUTO’s design does not exactly mimic that of illegal SSPSs.

Technical capabilities such as PLUTO are necessary to counter and stay ahead of threats to the country.  Admiral James Stavridis, former Joint Commander for all US forces in the Caribbean, Central and South America, wrote, “Criminals are never going to wait for law enforcement to catch up.  They are always extending the boundaries of imagination, and likewise, we must strive to push forward technology and invest in systems designed specifically to counter the semi-submersible.  We need to be able to rapidly detect and interdict this new type of threat, both for its current effects via the drug trade, and – more troublingly – for its potential as a weapon in the hands of terrorists.”