Posted by the Office of Public Affairs 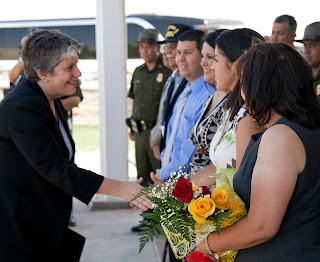 During her remarks, Secretary Napolitano underscored the critical role of the Border Patrol Academy in giving all of our Border Patrol agents – wherever they serve – the tools and skills they need to succeed in the challenging and important work they do each day to help secure our nation.

Following the ceremony, Secretary Napolitano toured the facilities at FLETC-Artesia and viewed Federal Flight Deck Officer (FFDO) cockpit training simulators. FFDOs are flight crewmembers authorized and trained by the Transportation Security Administration Office of Law Enforcement/Federal Air Marshal Service to use firearms to defend against an act of criminal violence or air piracy – one of our multiple layers of aviation security. 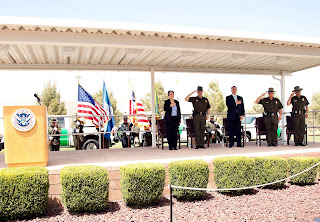 As one of three residential training sites in the United States, FLETC-Artesia includes a full range of facilities for conducting basic and advanced law enforcement training. The Border Patrol consolidated all of its training activities at the Center in September 2004.