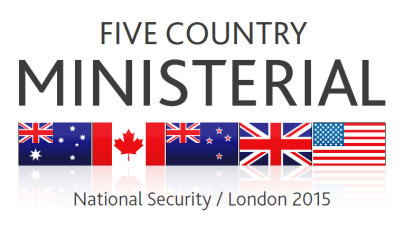 Continuing the successful cooperation and joint work among the Five Countries on issues of security, serious and organised crime and cooperative border management, the ministers discussed a range of national security issues: counter terrorism; foreign fighters, and in particular those travelling to participate in terrorist organisations in Syria and elsewhere; foreign investment in critical infrastructure; online threats; and information sharing.  They also received an intelligence briefing on the continuing terrorism threats against the security of the Five Countries.

The Ministers discussed how the Five Countries should collaborate to counter violent extremism, by sharing approaches to evaluating the effectiveness of prevention and intervention efforts, developing a proactive strategy to address extremist and, in particular, terrorist use of the internet and social media platforms, and exchanging approaches to the identification and management of radicalised individuals, or those at risk of radicalisation, to support violence.  They agreed that there must be a sustained and aggressive approach to address these challenges and welcomed the opportunity to work with companies providing such services to achieve this.

The Ministers also discussed information sharing, when appropriate and in accordance with relevant domestic and international laws, on travellers who could pose a threat to the Five Countries’ national security or interests.

The Ministers discussed potential methods for improving the sharing of information and intelligence on foreign investment, with attention to best practice approaches, to understand investor intent and patterns of ownership, mitigate national security risks and enforce risk mitigation mechanisms.

The Ministers also agreed to maintain and strengthen the collective efforts of the Five Countries to address the cyber threat to critical infrastructure, ensuring that there is visibility of emerging threats, to identify initiatives that could address gaps in activities, with an early focus on improving information sharing with industry.

The Ministers agreed to work together on a range of serious and organised crime issues: to take a collaborative approach with the technology industry to help protect children from sexual abuse online; take forward the Global Alliance Ministerial Statement and #WeProtect Statement of Action; and expand the sharing of information on known sex offenders.

The Ministers reaffirmed the importance of working collaboratively on national security issues and agreed to continue to meet to address issues of mutual concern. The next meeting will be in Canada in 2016.