More than 66,000 football fans poured into U.S. Bank Stadium in Minneapolis this past February and were able to enjoy the nation's 52nd Super Bowl in a safe and secure setting. A few programs to enhance the overall security efforts were fielded before and during the big game by the Department of Homeland Security (DHS) Science and Technology Directorate (S&T). 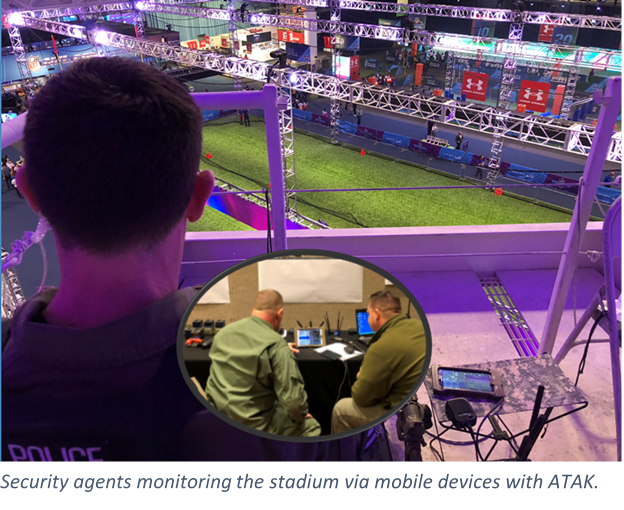 Among these were liability protections for providers of security technologies, analytics for defending against illicit drones, and enhanced situational awareness for security teams.

From the Field to the Stands: Protection for All

S&T worked with owners of U.S. Bank Stadium to evaluate their security systems and get them approved for SAFETY (Support Anti-Terrorism by Fostering Effective Technologies) Act protections before the game. This allowed the stadium to invest in the most current security technologies, granting providers of those technologies liability protection in the event of a terrorist attack.

“After September 11, 2001, the private sector was hesitant to reinvest in advanced security technologies, given the potential liability risks in the event of a terrorist attack. This reluctance created the potential for under-investment and under-deployment of necessary security capabilities,” said Bruce Davidson, Director of the Office of SAFETY Act Implementation (OSAI), “Congress enacted the SAFETY Act in 2002 to assist in mitigating these risks, and to encourage the widespread deployment of effective anti-terrorism technologies and services that could save lives.”

The SAFETY Act re-incentivized the private sector to invest in state-of-the-art security by protecting “qualified anti-terrorism technologies” in anything the DHS Secretary has deemed an “act of terrorism.” Thanks to these provisions, S&T was able to assess U.S. Bank Stadium’s technologies and approve certain “qualified anti-terrorism” measures including policies, procedures, services, controls, and systems contributing to structural and physical security during the Super Bowl.

Twelve NFL stadiums, four MLB ballparks, and two venues that host NBA games have undergone this evaluation in past years, including such venues as FedEx Field, Yankee Stadium, and Comerica Park. Visit https://www.safetyact.gov/ for more information about SAFETY Act certified and designated venues and technologies.

Only Eagles Flying Over the Stadium

Along with its evaluation expertise, S&T brought its own technology to the table. Developed by the Program Executive Office of Unmanned Aerial Systems (PEO UAS), the Counter Small-UAS Advisory and Review Toolkit (C-SMART) was used to assess the stadium’s vulnerability to illicit drone activity.

The toolkit draws from a collection of models and databases to analyze the environment for potential vulnerabilities or entry points for illegal drones. The FBI and other security providers used the data generated by C-SMART to enhance security during the game.

With increased public access to drone capabilities, there is higher potential of criminal use. Luckily, data collection and analysis by the C-SMART suite allows increasing understanding of situational drone threats.

“S&T’s toolkit is becoming an indispensable fixture in establishing the security posture of major events like the Super Bowl,” said Syed Mohammed, Director of Modeling and Simulation at S&T, “By working closely with organizations across the Homeland Security Enterprise (HSE), PEO UAS continues to mature its technical capabilities in direct support of Component and HSE stakeholders and customers.”

This ATAK capability was part of a greater network of integrated voice and video communications, consisting of airborne and mobile sensors, providing HSI the holistic awareness needed to monitor the event and respond to any likely threats

S&T’s ATAK has already been deployed in a wide range of operations, including response to Hurricanes Harvey, Irma, and Maria and training exercises for Homeland Security Investigations, Customs and Border Protection, the U.S. Coast Guard, and other members of the Homeland Security Enterprise.

“The Team Awareness Kit (TAK) has proven to be an invaluable tool,” said the HSI Tactical Supervisor for Super Bowl 52, “In addition to command and control, TAK allows the Tactical Operations Center and the operators deployed in the field the ability to collect and disseminate intelligence in a real-time and secure environment. TAK also allows HSI SRT to federate with all other DHS, federal, state and local agencies equipped with TAK, which provides the Joint Tactical Operations Center with a real-time overview of all assets in the area of operations. The value to Command and Control and information sharing between all supporting elements cannot be overstated.”

For more information or to request a copy, visit https://atakmap.com/.

Thankfully, Super Bowl 52 carried on safely and smoothly as planned. One of S&T’s priorities is to secure high-profile events like the Super Bowl because they largely represent American communities in a broader context. In this case, the safe and secure enjoyment of “America’s Game” was carefully facilitated in a legal, analytical, and tactical respect.

S&T’s efforts to innovate and transition technology are driven by the security needs of the United States. S&T works to promote security not only for high-profile events, but for everyday American life.