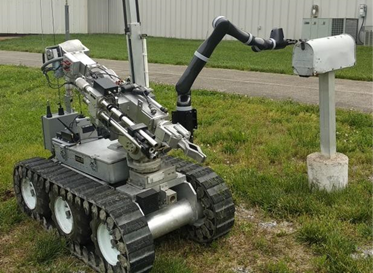 Powerful explosives can be made from common consumer goods, like pool sanitizers, fertilizers and paint removers, that are bought and sold every day in the United States. In the hands of the wrong people, these basic materials can be used to make improvised explosive devices. Homemade bombs pose a credible threat and can cause mass casualties, infrastructure damage and spread fear among affected communities.

Reliance upon bomb squads comes at the price of placing members in dangerous environments. With that in mind, the first responder community identified an improved robot as a critical need for bomb and explosive ordnance disposal (EOD).

“The goal of this collaboration is to assist bomb technicians in both countries to refine and enhance their ability in render safe procedures,” said Byung Hee Kim, Program Manager for S&T’s Response and Defeat Operations Support (REDOPS) program.

The robot accessory arm is part of S&T’s ongoing work with MOPS to facilitate research, development, testing and evaluation activities and deliver enhanced capabilities to law enforcement and public safety personnel in both countries. 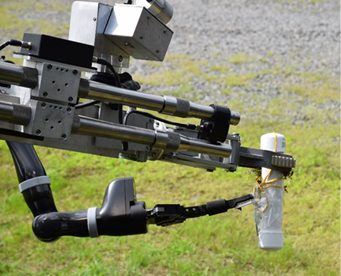 S&T worked with its Israeli counterparts to integrate Remotec Inc.’s Andros Wolverine 6X6 and accessory arm system. Since a suitable option for the secondary manipulator was available as an off-the-shelf product, there was no need to develop a new robotic arm. The team selected the Jacob® arm produced by Kinova Inc., a robotics manufacturer serving the medical and first responder markets. The Jaco arm was tested and combined with a high-strength finger gripper from Robotiq. The Remote Accessory Arm was then integrated with the Wolverine bomb disposal robot as a secondary, highly dexterous small arm.

Together, the Kinova Remote Robotic Manipulation System enabled more precise video-guided manipulation of potentially hazardous materials using the Remotec Andros platform. Upgraded movements were adapted with the addition of a video camera inside the arm so the finger assembly could provide the remote operator with a constant stream of the inspected object. The team incorporated additional enhancements throughout the prototyping process, such as a standalone radio for remote-control operations, a mechanical adaptor for installing the arm on an Israeli or U.S. robot, and camera unit including a laser pointer device within the new manipulator arm. These improvements should allow users to perform multiple delicate tasks—such as unzipping a suspicious backpack, extracting detonators, opening doors, using tools such as knives, samplers, and scissors—with greater ease. And the arm is designed to better mimic movements of a bomb technician for quicker device disabling.

Technician evaluators noticed how the ability to remotely change tools down-range significantly reduced the time required to disable a bomb, in comparison with the use of one arm. In addition, the second arm preserved forensic evidence at the scene while disabling the bomb, keeping it intact and avoiding detonation.

“The arm and its accessory system give bomb techs new capabilities and increased dexterity, so instead of having another robot come and assist with disabling a bomb, they will have another appendage right there to help them negotiate whatever task they need to,” said Kim. “This arm makes them work more efficiently and quickly and saves money.” 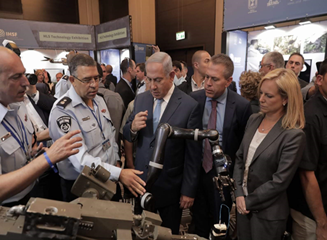 In April 2018, S&T’s REDOPS program conducted a training exercise in Israel with U.S. public safety bomb squads, the INPBDD and industry representatives from the U.S., Canada and Israel. Technicians exchanged knowledge and received feedback from the end users based on experiences utilizing the manipulator on bomb disposal render safe procedure scenarios to result in a high caliber operational prototype.

“This level of visibility on an S&T project shows the value of its partnerships and the work S&T does in support of the DHS mission,” Kim explained.

The following year, S&T and the Israelis successfully demonstrated and delivered a prototype of the accessory arm robot in Fairfax, Virginia, where many state police departments and industry companies participated, including the Michigan State Police, New Jersey State Police, Fairfax County (Virginia) Police and DAGER Technology. The robot accessory arm on an Andros Wolverine Robot performed a series of joint operational scenarios, leading to the development of a product tailored to the operational requirements of bomb squads.

Remotec and Kinova have since agreed to distribute the Kinova Remote Robotic Manipulation System, which is now commercially available. “The commercialization of the Robot Accessory Arm is a success for DHS and more importantly for the bomb squads that have gained a new life-saving technology,” said Kim.

Under the agreement, Remotec sells the Kinova product as a remote option on the Andros platform to the U.S. first responder and law enforcement markets. Remotec also provides customer service, training and technical support for this new capability.

For more information about the Robot Accessory Arm and REDOPS, contact first.responder@hq.dhs.gov.