Recently in Rhode Island, the Office of the State Fire Marshal was called in by local law enforcement to examine a possible pipe bomb. Once the area was secured and the public was at a safe distance, the bomb squad went to work assessing the device. When they determined that it was indeed a live pipe bomb, loaded with explosives and deadly shrapnel, the responders used a Department of Homeland Security (DHS) Science and Technology Directorate (S&T) developed tool called Power Hawk to carefully disable (or “render safe”) the bomb. 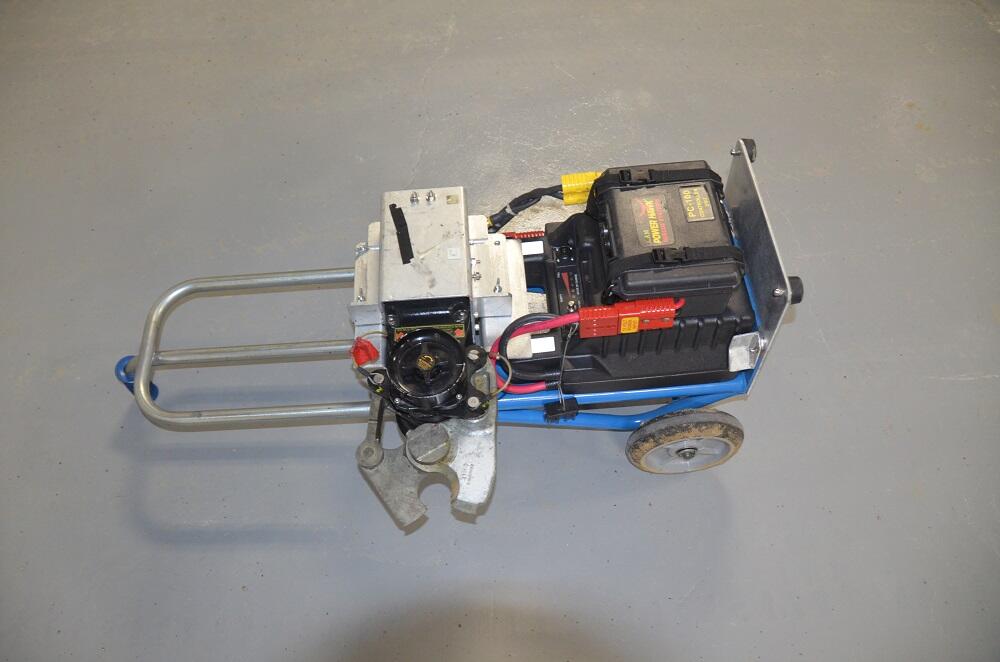 “Our bomb technicians engaged the Power Hawk as a non-energetic means of remotely rendering the pipe bomb safe,” reported Deputy Thomas Groff, Bomb Squad Commander with the Rhode Island State Fire Marshal’s Office. “We were successful in doing so.”

As dangerous as this scenario sounds to the general public, in listening to Groff’s matter-of-fact description one might be tempted to think that this render safe operation was just another regular day at the office for bomb squad technicians. To a degree it is, but there was something different about this encounter.

Like many other bomb squad tools, Power Hawk enabled the bomb technicians to be at a safe distance from the explosive device during the procedure. However, what makes Power Hawk so special is that the bomb itself was not destroyed while being rendered safe. Since the components were left intact, the authorities were able to recover valuable forensic evidence that helped lead law enforcement to the arrest of the bomber.

Pipe bombs are the most commonly used Improvised Explosive Devices (IEDs) on American soil. Like the one used in Rhode Island, pipe bombs get their name from the casing of choice. Usually this means a section of steel water pipe. The inside of the pipe is packed with an easy-to-acquire explosive and often nails, bolts or other metal objects that will serve as shrapnel. The ends of the pipe are then sealed. When ignited, pressure builds up within the sealed pipe until it rips apart the casing—and that’s what makes the weapon so devastating.

Making things worse, due to the nature of the explosive mixtures used in them, pipe bombs are notoriously unstable and prone to premature detonation. This can happen from seemingly innocent events that initiate internal pressure, friction, static electricity or other forces.

Unfortunately, the science and construction behind the development of IEDs is constantly evolving and will continue to threaten lives and property. However, S&T is dedicated to defeating that threat through the Response and Defeat Operations Support (REDOP) program, which leads the charge in helping to ensure public safety bomb technicians have the tools and solutions to do their jobs faster and safer.

“Our mission is to support state and local bomb squads (SLBSs) by focusing on collaboratively addressing the homeland’s IED capability gaps, helping develop the best solutions and connecting those solutions to the technicians in the field,” said REDOPS Program Manager Byung Hee Kim.

Power Hawk was originally developed as a miniature version of the very well-known “Jaws of Life” rescue tool that firefighters have been using to free trapped victims from car crashes and other dangerous situations for the last fifty years.

However, several years ago, REDOPS discovered that both the Michigan State Police (MSP) and the New Jersey State Police were using Power Hawk tools on pipe bombs with great success. Kim pointed out that “This is exactly the type of innovative thinking that REDOPS is always looking to bring to the broader SLBS community.”

Subsequently, REDOPS and the FBI wrote a report detailing exactly how to use Power Hawk to defeat pipe bombs. That report was disseminated to all SLBSs across the county, and Power Hawk has been widely used ever since.

The Power Hawk has two major component parts to it: an extremely powerful hydraulic engine and a pair of scissor-like jaws.

The jaws are studded with metal teeth that clamp down and hold the pipe bomb steady. One of the reasons Power Hawk is so effective at rendering pipe bombs safe is that when the jaws engage, they slowly and smoothly crush the pipe. This causes small fractures that release pressure inside the pipe and prevent the buildup of gases that would power an explosion.

Overall, the tool is about two-and-a-half feet long and weighs about 40 pounds. Power Hawk is smaller and lighter than its big brother used in rescues, but it is still heavy and somewhat cumbersome. This is especially true for bomb technicians working with the added physical stress of wearing an 80-pound Kevlar bomb suit.

Precision and control are obviously important when dealing with explosives. The original solution to the awkward weight issue presented by the Power Hawk was to attach it to a large robot. However, this puts a very expensive robot at risk when rendering safe an IED. It also further limited the use of the Power Hawk to well-funded teams with larger robots.

To overcome this hurdle, MSP bomb squad technicians figured out another ingenious solution. Using components that were inexpensive and easily found in commercial stores, the techs constructed a mobile mounting stand to which Power Hawk can be attached. The stand (similar to a 2-wheel furniture moving dolly) can be pulled by a relatively small and inexpensive robot.

Once affixed, the robot can then transport Power Hawk to the IED. Alternatively, Power Hawk can be placed in a safe area and the pipe bomb can be delivered to Power Hawk. Either way, this cost-conscious workaround means that Power Hawk can be used by even more bomb squads around the country.

The MSP bomb techs didn’t stop there. They also devised a remote controller to operate the Power Hawk. That way, the bomb tech doesn’t have to manually handle Power Hawk and be in direct blast proximity to the bomb while rendering it safe. By using the new controller, the bomb tech and the robot can be protected.

All this is no surprise to Kim. “Bomb squad members are very inventive. Very technical. If they see a problem, they just figure out a way to solve it. Many times, that means inventing something new … . That’s why we go out and visit bomb squads across the county and literally look through their trucks to find do-it-yourself tools that they built with off-the-shelf parts. Sometimes, they are so humble, they don’t even know how brilliant their inventions are or how many other SLBSs they could help. That’s one of the reasons we do what we do.”

Groff expressed his gratitude to the REDOPS team for helping share Power Hawk with his bomb squad, “I just wanted to be sure you all saw the ‘real’ result of all your work. To be completely frank ... this stuff matters. It matters because it creates distance between us and a bad day. It also mattered because we recovered the forensics.”

REDOPS maintains a list of capability gaps for various IED scenarios and when the teams find innovative tools being used by SLBSs that help fill gaps across the community, REDOPS initiates a Micro Research and Development (R&D) Project.

In many cases, SLBSs don’t have the funds to do their own extensive R&D on defeat products. This can put them at a disadvantage because those who wish to do harm are always looking for new ways to inflict damage. In this continuously evolving pipe bomb arms race, SLBSs must always stay at least one step ahead of the bad guys. If they don’t, the results could be disastrous.

In support of SLBSs, REDOPS mines great ideas, do-it-yourself creations and workarounds created by technicians in the field from around the country. But its mission doesn’t stop there. REDOPS then helps to refine the product and begins testing them extensively with the help of other SLBSs. If the invention passes the RAPID criteria, they not only create and disseminate the report about it, they write the product assembly manual. These instructions detail exactly how to build the product from those inexpensive and easy to find parts.

Another function within Micro R&D testing, is that once REDOPS writes up the instruction manual, they send it to a pre-selected group of SLBSs so they can try to build it from scratch. The SLBSs will need to find the pieces (at stores or online) and build the tool, using only the instruction manual. The users then give feedback directly to REDOPS on if they were able to find, buy and build a working tool. That feedback is incorporated into the final manual.

If only some of the  big box stores would implement as comprehensive a system for developing their assembly instructions as the Micro R&D team has!

Power Hawk is a force multiplier

Kim says, “In the past, bomb squad techs would need to go down range and into harm’s way to operate the Power Hawk by hand. They would be in close proximity to the explosives, putting their lives in danger, but now, the robot via remote control can bring the Power Hawk to the bomb (or vice versa) while staying at a safe distance.”

REDOPS represents a technological force multiplier effect in the battle against pipe bombs. It works as both a full-service tech incubator and as a tech bridge between SLBSs across the country. Without REDOPS, the bomb technicians in Rhode Island would have never used Power Hawk, the mobile stand or its remote control. They would have had to place themselves in greater danger, as well as potentially risk losing the forensic evidence.

Kim summed up the impact saying, “We are providing new capabilities to the bomb squads. They are fully informed about the technology, and they know it is fully tested.”